Finally showing down long enough to post the rest of our new friend’s visit! The boys LOVED having Buddy around….once they adjusted to him. 🙂

Just as I stated in the previous post, some of these are straight copies of pictures I found on Pinterest, others are ideas that I tweaked to fit our family, and a few are my own original late-night-gotta-move-the-elf ideas.

The pictures are terrible…from my phone. Ugh. My camera that I took in to be fixed in September STILL isn’t fixed. But let’s not talk about that touchy subject. Let’s just move right on to the pictures, shall we?

We were all sad to see Buddy go. I had just as much fun (if not more!!) than they did. We can’t wait to see him again next year!

You can see all of Buddy’s antics right HERE.

Here are a few more pictures of our elf’s antics this month. Some of these ideas came from Pinterest, some I tweaked, and some are my original ideas as I stood in the living room {bedroom, kitchen, etc} trying to think of something fun and quick because I just didn’t want to do any on my list. Ha!

I have several more to share but I’m out of time! Four days until Christmas and I still have a ton of Christmas shopping and baking to do.

If you want to see more elf mischief, click on the Elf on the Shelf label below.

An Elf on the Shelf came to stay with us this year. He was so excited to spend the holiday season with us but the boys have been less than thrilled with him for the most part. Ha! They just don’t share his sense of humor I think. He’s promised to tone down the pranks if that will make them happy.

Day One: He was found dangling outside on one of my hanging baskets on the front porch. Poor guy stayed out there forever before one of the kids saw him!  Kaleb was a little leery of a tiny elf peeking in the window. He spent the day asking if we could just sent him back. 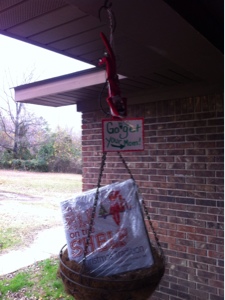 Day Two: The elf brought the boys a yummy sugary breakfast straight from the North Pole! Snow covered donuts, hot chocolate full of marshmellows, and  fun Christmas CD. He even dug out their chocolate advent calendars so they wouldn’t forget about the first day and left them a personal note on their plates. 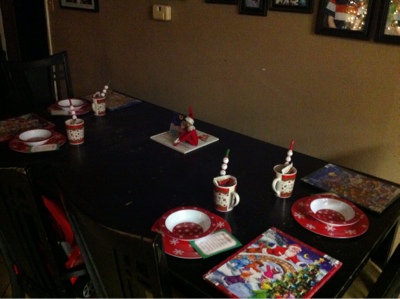 The boys hadn’t named him yet so he asked that we figure out a name. Three of the four boys voted for Buddy. 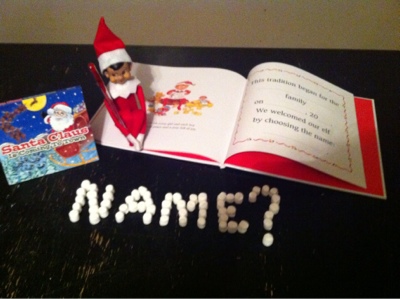 You can see that Kaleb decided maybe Buddy was a good elf! 🙂 The rest are in no particular order. I’ve been sick with a fever so I can’t remember exactly which we did on each night.
One night Buddy made himself some chocolate milk.  He left a note saying he had made more than he could drink and asked the boys if they could help him out. 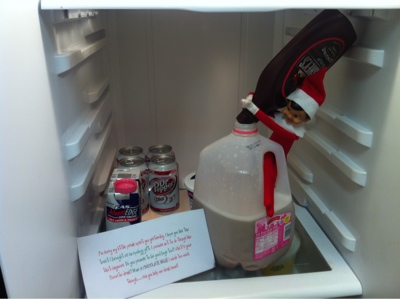 Of course they said yes! 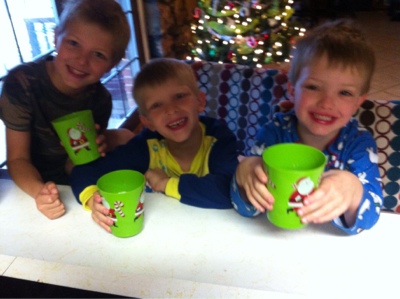 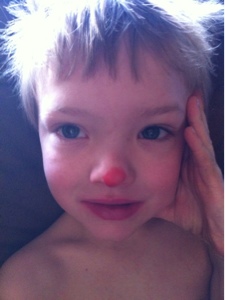 Buddy was naughty yet another night.  Gabriel said it was “a waste of perfectly good toilet paper! Have you ever been stuck on the toilet with NO toilet paper?” Drake was equally upset. Ha! I think Buddy was beginning to see these guys didn’t think his pranks were as fun as he did. 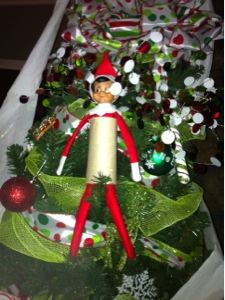 Budddy redeemed himself by spending a little time doing one of the boys’ favorite things….hunting! The boys were very excited to see that Buddy had found the Michael Waddell doll’s bow, and they thought it was hilarious that he was using a toothpick for an arrow. What else is an elf to use? 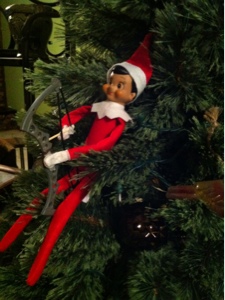 In case you’re wondering what exactly Buddy was hunting….well, it IS deer season!!  I wonder if elves need a hunting license… 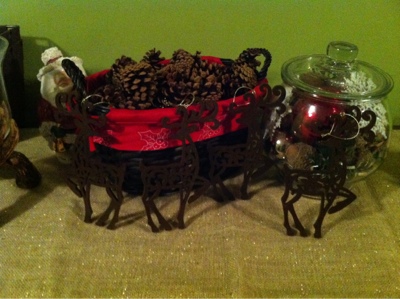 Lastly, another fun night for Buddy. Ziplining from the tree into a bowl of marshmellows! Thankfully nobody has attempted to copy Buddy’s little stunt. 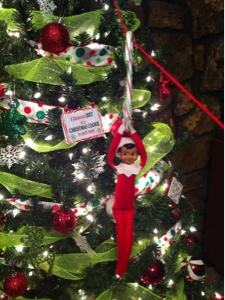 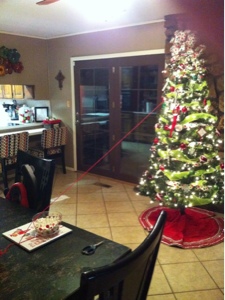 There were a couple more fun mornings of Buddy but I’ll have to share them next time. I’ve sat up as long as this illness is going to allow…time to nap with the baby!
Buddy is getting used to our family and understands that the boys aren’t especially fond of pranks. I think he has them figured out now so the rest of his visit should be a lot of fun. 🙂
All of Buddy’s antics can be found HERE. 🙂