I made a recent {re}discovery and had to share!!

I went to the D6 conference last year, and was given a few Seeds Family Worship sample CDs.  I took most of them to church to give away but I ended up keeping two. I put them in a desk drawer and forgot about them….until two weeks ago.

I was reading a blog that went on and on about the Seeds Family Worship CDs and how it made bible verse memory work SO much easier.  I wish I could remember the blog because it was AWESOME!

…and then I remembered those two CDs.

Since I already had the CD sampler, I decided to start with those verses and see how things went for my boys before buying the full CDs.

Also another great find….I did quick search and I found our first memory verse on You Tube.

You guys…after only THREE days of the YouTube video, my boys are singing (and reciting) 1 Timothy 4:12…on their own…throughout the day. The tune is short, sweet, and catchy…and they LOVE it! We have listened to the CD at least two or three times a day.

I added in these printables, and it’s made for a FUN week of memory work.

Be sure to leave an email so I can contact you! I’ll draw a winner on October 12th!!  YAY! Fun!

Week 5 was a short one…but for a GREAT reason. Daddy stayed home Monday AND Tuesday!  We knew he would be here on Monday but he surprised us by not leaving Tuesday morning!!
He hunted Monday morning. The boys and I had just started our morning time when Daddy called and said he needed some help so I dropped everyone off at Grandma’s and spent the rest of the morning helping him.  We got home in time to get a little bit of work done before football practice.
Tuesday was spent hanging out with Daddy.  When he’s home, we take advantage!  Then we all went to Kaleb’s first football game.  They lost but Kaleb had a lot of fun!
Daddy left Tuesday night so we got up early Wednesday to have plenty of time to make up some work missed on Tuesday.  No pictures…just a lot of good hard work. 🙂
Thursday was a little more fun.
﻿ 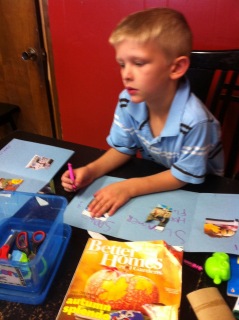 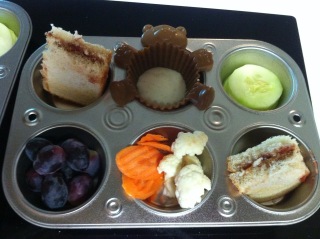 Friday morning was spent house and car cleaning. Then we met up with our homeschool friends for co-op.

I LOVE finding yummolicious-looking recipes on Pinterest, and giving them a try. I’ve tried a few, and had some successes…and not-so-successes.

The salsa was ok. Kind of seemed like it could use another flavor or two.  Maybe next time I’ll throw in some cilantro.  BUT the rub was FABULOUS!!  Loved it!

I am not fond of bone-in meats, so I used boneless pork chops. So tender and juicy. My boys loved it {minus the salsa…it was SPICY!}. The hubs loved it.

Week 4 was L-A-Z-Y!  I think partly because we had a HUGE change in our schedule….three football practices times two….SIX practices! With the hubs being out of town, these crazy busy weeks can wear.me.out.  I choose it though for my boys, and we always seem to make it through the season with a little sanity left. 😉
Monday was great. We didn’t get everything done but it was probably our best day this week. 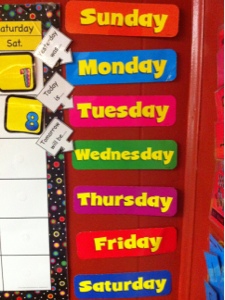 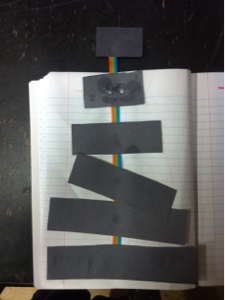 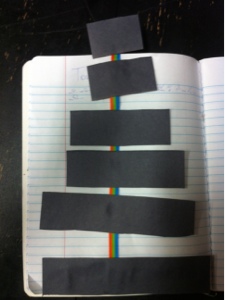 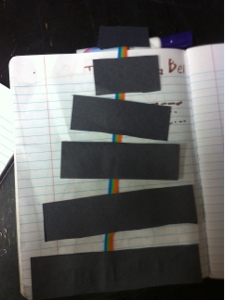 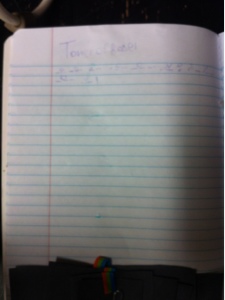 Tuesday was non-productive.  We did manage to have a FUN lunch!  Unfortunately that’s about it. Allergies and football practice (on freshly mowed grass) is making life difficult right now. Kaleb squeezed in some math and we read some. The end. Ha!
Wednesday was even worse.  We did NOTHING. Absolutely NOTHING.  Things quickly went down hill after breakfast. Attitudes were terrible (including mine). There were arguments. There were tears.  I declared it a school-free day, and we all went back to bed for a little bit. We all had hard time all day.  As soon as the teen got home from school, I left him in charge to run an errand with the baby (and get away from the house to get ahold of my own attitude…with a little chocolate help).  Came home with a much better attitude. Cleaned the house. Fix dinner. Put the kids to bed an hour early. And then watched a chick flick. 🙂
We regained ground on Thursday.  Maybe everyone just needed some extra rest.  Two of my middles woke up early. One got into my bed, noticed the baby was also wake (but one his way back to sleep as was I), and began talking to him which of course fully woke him up. 🙂  It was ok though because I was pretty well rested and ready to begin the day anyway. 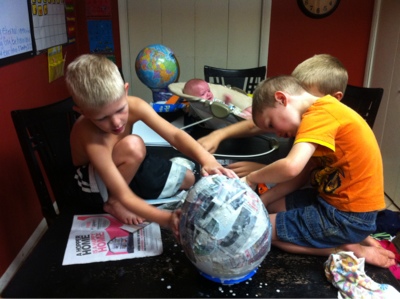 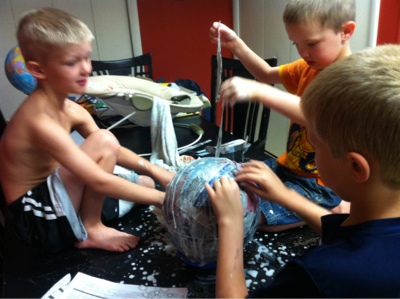 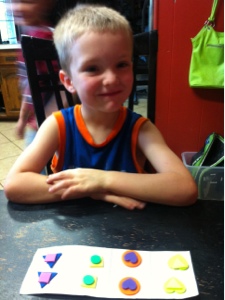 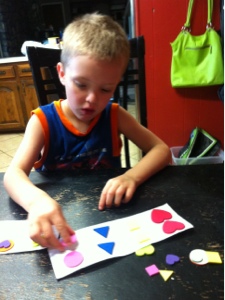 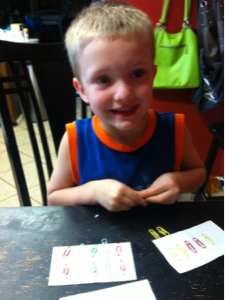 Co-op starts today so not much work will be accomplished at home but a LOT of fun learning with friends this afternoon!!  Hopefully I’ll have some of those pictures next time!
I’ll leave you with my favorite pic of the week. 🙂

This is my favorite fun lunch yet! 🙂  I don’t know how long I’ll keep it up with so many activities beginning now but I love surprising the boys with these once a week.
Still no muffin tins BUT at least I have remember to add new ones to my grocery list.  I guess I probably used the old ones for their intended purpose and then forgot them where ever I took them. Ha!
Aaaaaand unfortunately one of the boys dropped one of our fish plates on the floor when trying to help me clean so we’re down to just two. 🙂
Today’s lunch: *Tuna fish* sandwiches (if you know what those really are, don’t tell my boys…they won’t be very happy with me but where in the world would one find a tuna fish cookie cutter anyway?), open-faced cheese and almond butter sandwiches with left-over *tuna* bread, salad, raisins, and nectarines. Not pictured: juice and Go-gurt. 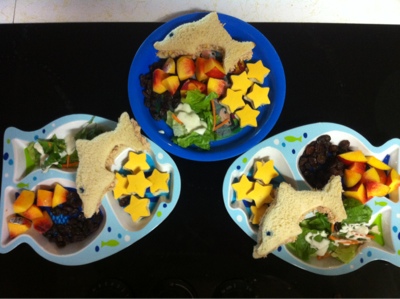 Couldn’t get anything going in the right direction today.

One problem after another.

Some groceries forgotten in the car. In the garage. In the heat.

Ready to put this day to bed.

Then a little blonde-headed boy says “Mom, we haven’t prayed tonight, you know.”

“Thanks for all you’ve given us, all we have. Thank you for this day. Thank you for not letting my mom forget to sign me up for football because I love it.”
So simple. So sweet.
I giggled. He giggled.
Hugs, kisses, goodnights, and I love yous passed all around.
Makes me think today wasn’t so bad.
Made some fun memories in between the problems.
Spent the day together.

Spent time outside on a beautiful day.
Watched them love on their baby brother.
Watched them play together with nothing but pinecones.
Little simple things that mean more than the problems of the day.
Perspective.

Well I planned for school to happen on Monday without realizing it was a holiday…..and Daddy would be HOME!  AND Nathan was out of school!! {we happily took the day off}

We had a great weekend with out-of-state (and in-state) family. Then on Monday after Daddy and Nathan did a little goose hunting, we took off to visit a brand new Cabelas close to our area. Daddy was thrilled!!

A great little break and, by Monday night, I was rested and ready to get on with some school!

Tuesday was the most FABULOUS school day!! These are the kind of days that make me SO thankful we can homeschool, and help keep me going through the not-so-fab days.

Wednesday was a full day of schoolwork, an unplanned errand, me constantly reminding the boys to do their chores, and numerous emails to and from members of our homeschool group about co-op.  It was exhausting….but productive. We didn’t get to start the craft project I had planned which was disappointing but it happens. 🙂  Really felt like we’re getting into an easy morning groove with schoolwork.  The morning flowed nicely and we had very little problems.  Drake and I are both learning patience, and Joshua so far has been great.

Thursday was another good day. We got in our morning time, decided to go to a local kids consignment sale, decided against that idea on the way there, detoured to one of our fave pizza places, and had a good lunch before going home to finish school work.

Friday is a short day. We slept in a little bit. Did our morning wall actvities. Tackled the last bit of Lesson 3 in Kaleb’s WW…a crossword puzzle. Reviewed much in Gabriel’s OPG. Colored many pages in Drake’s coloring book. Worked on our weekly bible verse which proved to be a bit of a tongue twister for the boys so it will carry over into next week. Going to town for a bit and then we’ll do some math, science, and history this afternoon.

Any week that consists of a lot of Bible and the three R’s with a generous sprinkling of everything else and a ton of fun is a GREAT week in my book.  This was definitely a GREAT week!!

Next week will be FULL of the activities and crafts that didn’t get done this week. LOTS of cool history projects, a restart on GtG by baking an apple pie, a paper mache Earth, and a couple science experiments….along with our usual studies. Also……CO-OP begins next FRIDAY!!!! K and G start little league football practice so should be a fun busy week!

Have an AWESOME weekend!

Three words that I have been whispering to myself with every problem, big or small, that has cropped up in the last year…reminding myself that I’m not going at this alone, that there is a PLAN already in place and everything is going according to that plan, HIS plan.

Three words that have calmed my heart on so many occasions.

And so when a friend said them in a moment of {my} panic without knowing my connection to these exact words, my heart smiled because I knew it was straight from God. His way of telling me it’s all part of His plan and will be ok.

Indeed. And THANKFULLY so.

Lately it seems things have been happening so fast and way out of my control.  Things that I didn’t expect and would have never seen coming.  Things that made me question myself and my ability/desire/call to serve others.

I have been beating myself up over these things that were never in my control in the first place.

Oh man. How FREEING that statement is! How humbling.

I had every intention of digging out the muffin tins we used a couple of years ago for mtm….and then it just didn’t happen. Ha!

Multi-grain crackers with almond butter, carrots with ranch, cheese circles with a cute pick, and a pudding cup. 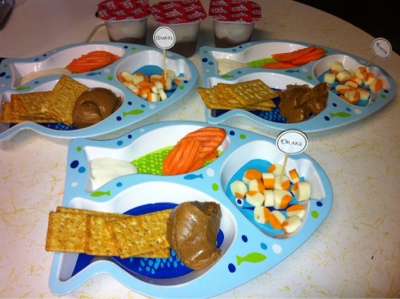 We’ll try to dig out those tins for next week! 🙂