Well after a busy birthweek (Gabriel) full of good food and SUGAR, I really didn’t want weigh yesterday.  BUT I did and I was surprised.  While I hoped I had miraculously lost at least one pound, I was afraid I had gained five.  However, I didn’t gain OR lose anything!  I stayed the same! I’ll take it.  Now to get seriously until the next birthweek in four weeks. 🙂

There won’t be much exercise this week as we are out of town but I can watch what I eat….so that is exactly what I am doing.  Hoping to get in two days of walking (Thursday and Friday) and maybe a short easy run on Saturday.

Maybe I can make those numbers move (down) a little next Monday!!

SO! A lot has happened since my last post.  First and foremost, we have a beautiful baby boy!!  He was born May 7th. My sweet little man. Joshua Glenn weighed in at 6 lbs 5 oz and was 19 in long.  He looks just like his younger three brothers did when they were born.  Everyone says he looks just like Gabriel. 🙂 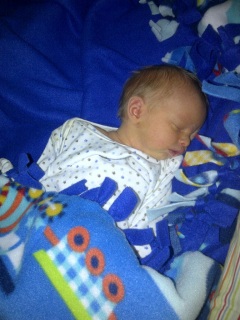 Love my baby boy but SO glad to NOT be pregnant anymore!  My energy is back.  All the pain and sickness gone.  He’s two weeks old and I’m ready to get back to the old me. Well the old-right-before-I-found-out-I-was-pregnant me. This me, back at the end of August, after two months of Biggest Loser against the hubs, four weeks before I took a pregnancy test {to rule out a pregnancy…ha!}:

The one who was working hard on her weight loss goals and feeling FABULOUS! That’s the me I want to be again.

Since I am only two weeks post partum, it will be a slow process for the next four weeks. Then GAME ON!

In the meantime, I’m going to do something I have NEVER done before……post my current weight and *before* pics….online…for all the world to see.  Mostly because I want the motivation to get back in shape and what better way than the pressure of failing in front….the world. Ha!   This is me this afternoon: 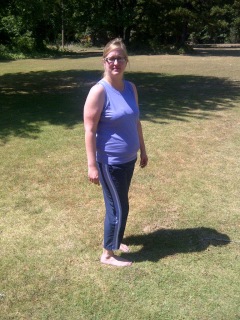 As you can see, I have some work to do. 🙂 My current weight is 188.2 lbs.  Ugh.  My goal for the next four weeks is to lose 6lbs.  That is 1.5 lbs a week.  Conservative, but healthy since I’m nursing a baby and do NOT want to mess up my milk supply.  Plus I promised the hubs I’d take it easy until my 6 week check-up.

To reach my goals:

I’m SOOOO excited to get back to working out!!  The eating right part kind of stinks…no more Twizzlers.  Oh well….I’ll have a cheat day every now and then. 🙂  Hopefully around finishing up schoolwork, summer activities, and taking care of a teeny tiny…I’ll have time to blog weekly on my results. AND get back to my weekly school reports….I need the motivation!